I am delighted to announce that Titan Comics have teamed up with the number one Doctor Who convention on the entire planet – Gallifrey One – to produce an exclusive cover for the event in February.

The cover features the wonderful Matt Lucas (as Nardole) and the inimitable David Bradley (as the First Doctor) alongside the Gallifrey One logo for this year: “The 29 Voyages”.

I will be attending the convention in Los Angeles between the 15th and 18th February and signing the exclusive alongside the stars of the TV show. 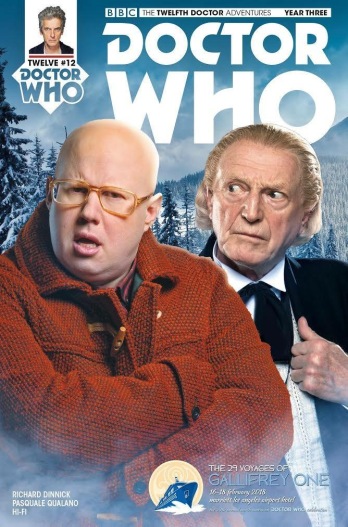 Shaun Lyon, the showrunner of the event said: “Pretty damn cool… an exclusive Titan cover for the convention written by a guest Richard Dinnick, featuring our guests on the cover David Bradley and Matt Lucas.”

The comic that bears this awesome new cover is the 12th Doctor #3.12, the penultimate part of both the third year of the book and of my four part story, A Confusion of Angels.

This featuring the Weeping Angels (Blink, Flesh & Stone, The Angels Take Manhattan, etc) squaring up against the Host (Voyage of the Damned).

Like Loading...
‹ VIP Screening of this year’s Doctor Who Christmas Special
I am contributing a short story and a foreword to the new Brigadier anthology, “Lineage”! ›